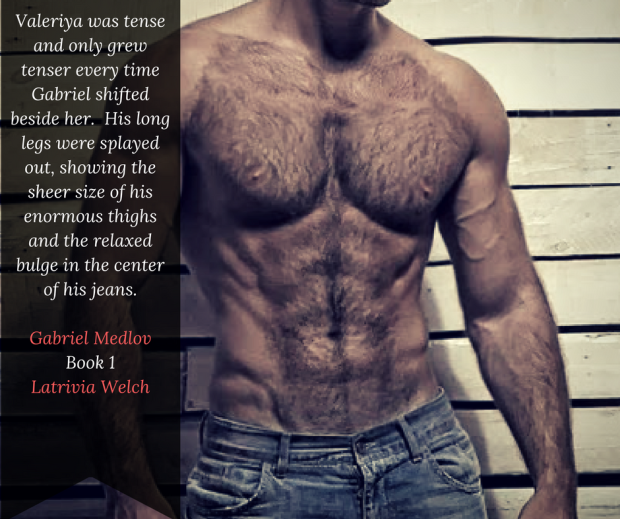 I remember when I first sat down in front of the computer to write Gabriel’s Regret.  I knew that I wanted to tell a story about a man evolving and what mental processes he would go through to become better than he was. Turning a Beta into an Alpha.  Not easy.  As I started my outline, I realized that every day, it grew more and more.  I had one idea after another and my team and I talked continuously about what would be best and what would be entertaining.  After all, that’s my job – to entertain my readers.

But Gabriel was special to me.  He was a hybrid of all things Medlov and all things Hutton.  We saw his backstory in The Chronicles of Young Dmitry Medlov and why every single thing that was happening to him was important not just to him but to the entire Medlov Family.

So once the outline was complete, the characters developed, the plot tweaked and the notes laid out, it was clear.  This book had to have two parts.  The first part had to tell Gabriel’s personal story of where he had come from and how pivotal meeting the beautiful black woman, Valeriya Nenya, had been in his life.  I wanted my readers to enjoy their relationship, understand their turmoil and just have a good time with one of our new characters, Nadei, before we moved to Book 2.

Book 2 is after the “big scene”.  I don’t want to give too much away, but we pick up with Gabriel and see him strengthened as a man, but we also see him outwardly change and challenge his surroundings.  Valeriya is a major part of this story because she meets the family and she meets Briggy.  Plus, she goes to war for her man.   There is also so many others to consider like Dmitry and his own developing story, Royal and her ambitions, Anatoly and his desire to keep his own family close and now we see a new and improved Vasily.  The entire family comes together in Prague to show out.  Of course, some of our secondary but very exciting characters are back like Boris and Marat.  There are several explosive scenes in Gabriel’s Regret: Book 2 that are just too awesome for words.  It’s action packed and full of plot curveballs, but it won’t make the least bit of sense if you haven’t read Book 1.

I am very proud of this book, because I took my time and told the story that I wanted to tell for Gabriel, but I was also able to give him a bw/wm relationship that was passionate and concrete.  With Valeriya and Gabriel, I think we have a winner.

Well, more updates will come.  We’re going to have fun over the next month with radio shows, conference calls, interviews, etc.  Please be a part of all of it.  Give me your feedback and enjoy.

Before I go, I’d also like to say that there is nothing better than the support I have received from my fans.  My ladies and gents here in the United States have shown up and shown out!  My international fans have been equally amazing.  I hear a lot of stories and see a lot of negative things on the Internet designed to destroy authors, designed to kill their sales and designed to assassinate their character, but I truly believe that I have some the best fans the world has to offer, because you are always so encouraging and uplifting.  The emails, texts, phone calls, Facebook messages, twitter posts and blogs posts are so beautiful and mean so much to me.  Thank you.  Thank you.  Thank you.

4 thoughts on “The Thought Process Behind Two Books: Gabriel’s Regret”